From the depths of space, an incredibly ancient vessel drifts slowly towards the Imperium of mankind...........

Yes folks, I went and used my first joker on, "Space Hulk" by Games Workshop.  I would like to point out that it theoretically is a board game, but....Since I plan on painting the mini's, Chris ruled that it was a joker. Blast it! 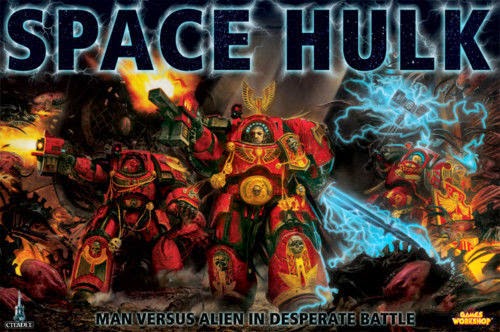 So, what came in the box you ask? Well, here is the list on the back of the box -
1 Rulebook
1 Mission Book w/16 Missions
12 Space Marine Models
22 GeneStealer Models
1 Broodlord Model
3 Mission Objective Models
110 Gaming Counters
77 Corridor and Room Sections
2 Boarding Torpedoes and Ramps
20 Doors w/Plastic Stands
5 D6 Dice
1 Mission Status Display
1 Timer
I'd also like to note that the first thing that fell out when I opened this monstrosity of a box (it bloody weighs AT LEAST 10 pounds) was a roll of ZipLock bags to store all the counters in! Well done GW.
This will be honestly my first move anywhere near the 40K universe...but after having a read through the rulebook, I'm excited to have a game or 10.  There will be further pics and progress reports as I clear room on the workbench to be able to work on this stuff!﻿
Posted by Spiderweb of History at 11:47 AM