The Start of An Army

So this morning I dug out all my Roman/Carthaginian/Gaulic/Celtic forces and divided them up into the different armies they'll be representing.  I've got enough figure for a sizable Republican Roman Army vs Carthaginian Army, and a sizable Imperial Roman Army vs a Celtic/Gaulic Army.  One of my reasons for choosing Ancient Period gaming is because I can use some of these forces interchangably, i.e.Gauls/Celts can be attached to either Carthaginian or Roman forces for playing allies/irregulars.

I did a quick scrub with Dawn dishsoap and then soaked for 5-10 minutes in vineger of the Gaulic/Celtic forces. 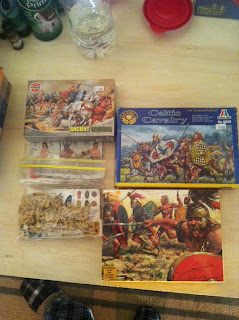 The beginging forces for my gaulic/celtic army are starting from:
Revell Gauls
Italeri Celtic Cavalry
ESCI Barbarians
Airfix Ancient Britons
HaT Carthaginian Allies
My plan for today is to get them divided up into the figures I want on each base, clean them up, and probably go ahead and glue the cavalry figures to their respective horses and then if I have time I'll maybe primer them.
More to come later...........hopefully.﻿
Posted by Spiderweb of History at 11:36 AM No comments:

More to come later, just wanted to pop in and say hello.  My son's surgery went well and we're home about three days early so hopefully I'll be able to get some work done.
Posted by Spiderweb of History at 8:23 AM No comments: