In my "I'm not buying figures, trying to clean out some of my backlog" state, I pulled some of the zombies that I purchased back in 2011 when I first got back into wargaming to finally get some paint on them.  Also two from Studio Miniatures excellent range.  I give you -


These 5 make another awesome addition to my growing zombie horde.  Hoping for this year to be the year that my planned Zombie Apocalypse campaign gets off the ground.

Posted by Spiderweb of History at 2:07 PM No comments:

A couple weeks ago, I was going to be at a slow-ish firehouse for my 24hr shift, so I took the old solo Avalon Hill game "Queen of the Skies" about the bomber missions against mainland Europe in 1943-44.  I played through several missions and had a great time in the evening after our daily duties and training were done and between emergency calls and it reminded me how much I like some of the old board games I played with my Dad and Grandpa as a kid.

Hopped on ebay and acquired a couple more to add to the collection.  I'll post some more pictures/game reports etc. once I actually play some games, but here's what I got - 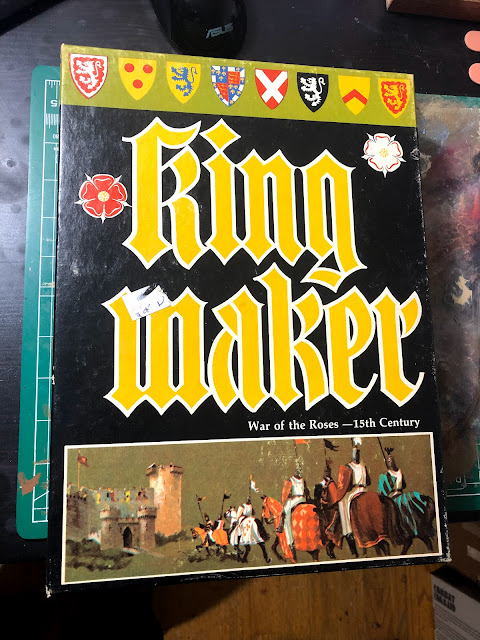 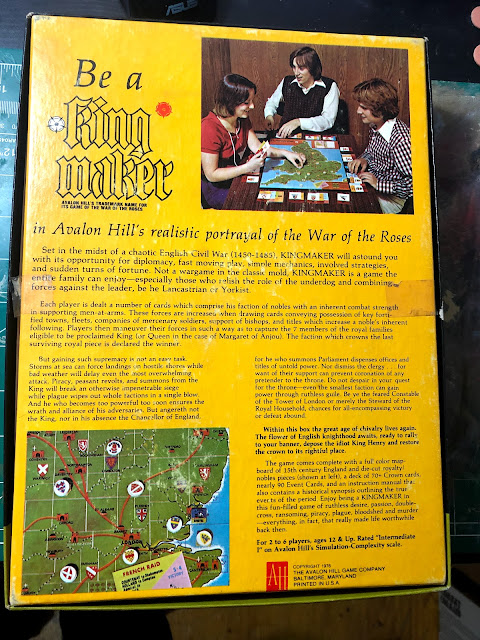 Kingmaker is one I've been after for awhile, but was always going for silly money on ebay, got this one complete and in very decent shape for being 45 years old! 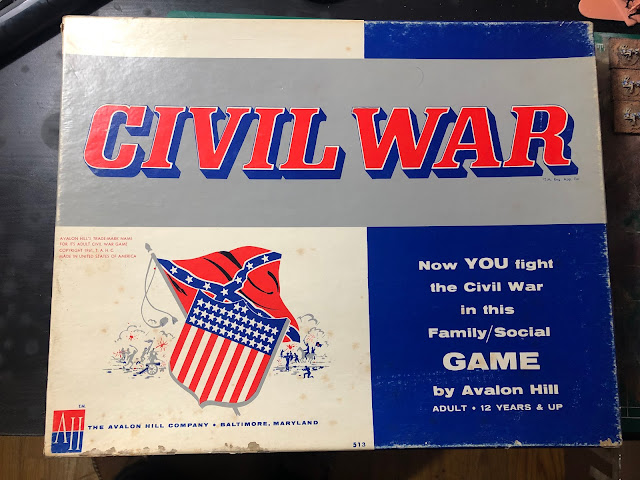 Civil War from Avalon Hill circa 1961.  Board and Rules are in great shape, but the tokens are all replacements. 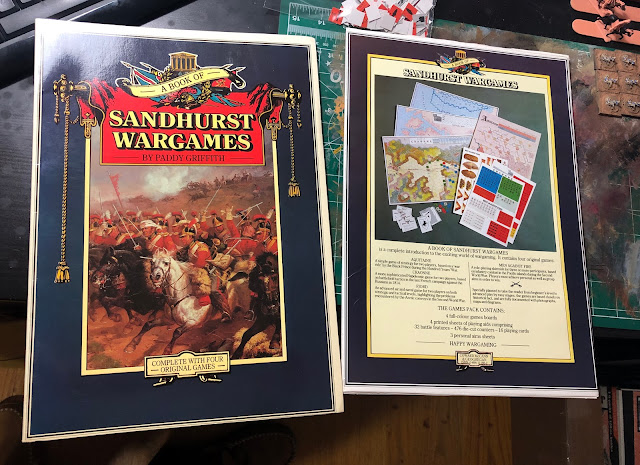 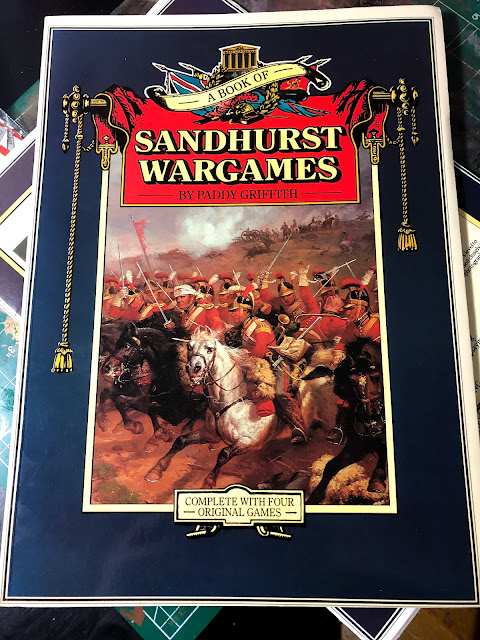 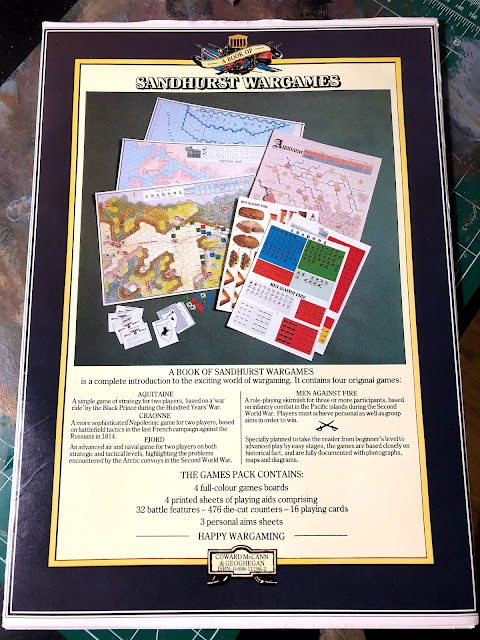 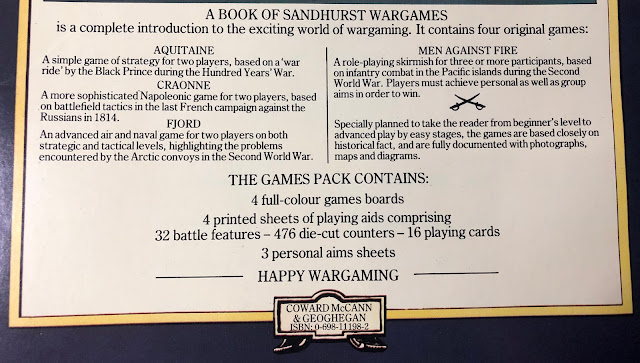 The story behind this is - I saw a conversation on twitter between Professor Tony Pollard and Henry Hyde about this "A Book of Sandhurst Wargames" by the esteemed Paddy Griffith.  The pictures Prof. Pollard posted were mainly of the maps which piqued my interest, so I jumped on ebay and amazon and picked up a complete and in damn near pristine shape copy for about $8.50 plus shipping.  Looks very interesting and the maps are AWESOME!

That's all for now, more to come soon!
Posted by Spiderweb of History at 3:29 PM No comments:

Email ThisBlogThis!Share to TwitterShare to FacebookShare to Pinterest
Labels: Boardgames

One of the projects I want to make major headway on this year is my pirates.  When I got home from my last deployment, I had ordered most of the Foundry range of pirates, stuck em all on bases and promptly packed them away in a box.

Time to rectify that, as I have several suitable rulesets such as - "Blood & Plunder", "Flashing Blades", "Donnybrook" etc.

Those, combined with some naval rulesets for the naval side of things could make for some very interesting little campaigns, so to that end, I've made a start on painting the figures.  As per usual, I've painted 4 and gotten bored, so more will come as we go through the year.


Foundry figures are awesome to paint. You can really tell that their sculpters keep ease of painting in mind.  Will probably be ordering more from them at some point.

Potential Projects and the 1st Finished Figure of 2019

Happy New Year folks!  First post of 2019 and only a little over a week in!

Plan for this post is to layout the myriad of potential projects I would like to work on/make progress on this year.  Also at the very bottom is my first finished figure of 2019!

In no particular order mind,

Yeah...it's a lot.  I may have a problem.  The Lead/Plastic Mountain in the closet maaaaaaay prove it...

But no matter, we're gonna make a lot of progress this year, starting with this gal -

Jyn Odan from Imperial Assault.  I am really hoping to get all the minis painted for this game this year, I'm just soooo far behind on expansions.  The detail on Jyn was a little shallow, but I think she turned out ok.  IA figures are rather hit and miss, some are bloody fantastic, others are a bit meh.

Anyways, we're off to the races.  Here's to a great year for all of you hobbyists out there!

Posted by Spiderweb of History at 2:44 PM 4 comments: