So, here in about 30 minutes, the 6 Month Mountain Reduction and Painting Challenge begins!
My rough draft plans are as follows -
September - Dark Ages. My goal is to finish up my Anglo-Danes, Vikings, and get a start on my Picts and Welsh.
October - Zombtober! I've got loads of zombies primed and ready for paint, and loads more awaiting assembly and paint. Will probably work on a lot of post-apocalyptic stuff during oct as well, as I'm expecting Across the Dead Earth KS stuff to arrive any day between now and Oct 31st.
November - Roman Invasion of Britain project that's been in the works for over 2 years now. Roughly 200 1/72 plastics waiting for finishing.
December - 6mm ACW. I have close to 2000 figures that need painted, and I'm planning on putting gods own scale (according to Peter Berry) to the test.
January - WWII. I've got armies for Germans (both early and late war), Brits, Japanese, Americans, Polish, and Russians...with misc. Finns, Italians, and ANZACS - in scales ranging from 6mm to 1/32. I expect my Dad and brother will be jumping in on this.
February - Force on Force project. I have been collecting forces for a couple of campaign ideas for FoF for awhile now - a 2nd American Civil War set in modern times, and a British Civil War set in the 1970's-1980's...maybe controversial...the plus side is, all these figures can and will be used for - Modern Iraq/Afghanistan, Falklands War, A soviet invasion of Western Europe etc.
So, that's the rough plan. We'll see how well I stick to it. Terrain is also a goal for every month.
Something I'd like to see anyone who partakes in the challenge do is at the end, ie March 1st of 2015 - gather everything you've finished, and take a mass picture. I think it'd be cool to see everything compiled together!
Anywho. Good Luck!
Posted by Spiderweb of History at 9:31 PM 3 comments:

Email ThisBlogThis!Share to TwitterShare to FacebookShare to Pinterest
Labels: 6MMRPC

So, awhile back, I backed several Kickstarter's that will be arriving here shortly (barring problems) and while it will be during the challenge, as I'm scheduling them in as part of my plans for the challenge, I think it's in keeping with the rules. Also the fact that I paid for them in the spring. 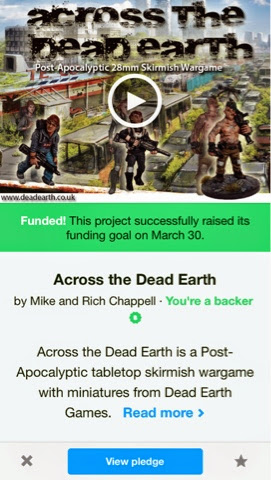 This is supposed to arrive in September. I backed it because I'm greatly into post-apoc games, and this is a load of interesting figures, rules etc in that genre. When it arrives I'll write up a review as I have time. Keeping in it's spirit though, I highly recommend the book - 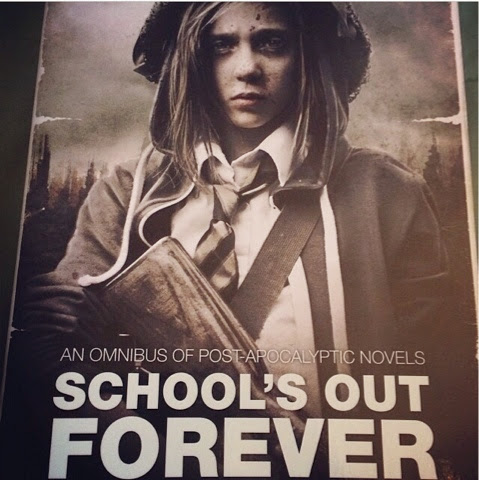 Which is set in Britain during the apocalypse. Fantastic read! I'm going to re-read it and put up a proper review.
The 2nd KS I'm expecting to arrive either in sept or oct, is - 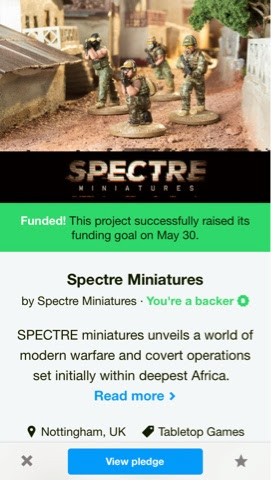 I first heard of this through the Perry's Facebook page I believe. Fantastic looking figures, can't wait to get my mitts on 'em. While it's meant for Africa, I plan on also using the figures for Modern Iraq/Afghan games and my Zombie Apocalypse games.
The last KS I'm waiting on is - 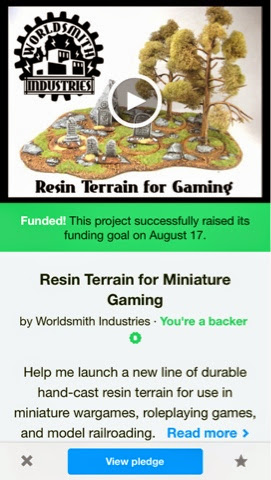 Doing this on my iPhone, I can't remember when this is supposed to arrive. But, looking forward to having some quick terrain to paint up and get on the table.
Now, I heard a rumor that Studio Miniatures is going to be doing another kickstarter for some Walking Dead-esque miniatures sometime in the next several months...well, that's definitely a Joker card.
Posted by Spiderweb of History at 2:59 PM 1 comment:

These are some of my favorite models to date! Clean sculpts, hardly any flash or mold lines, painted up like a dream! Highly recommended. 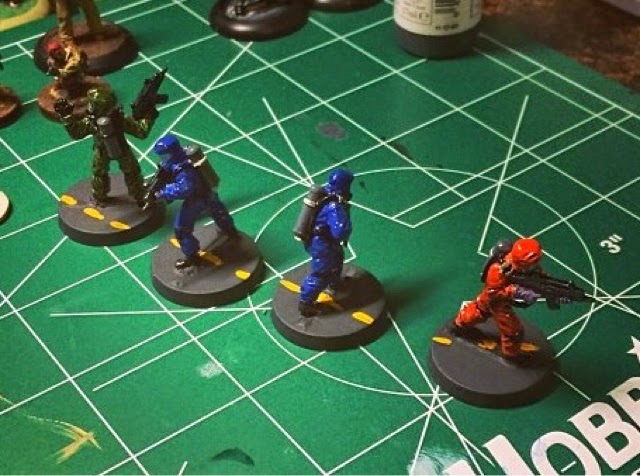 Having quite a bit of experience in the Hazmat world, I painted three of them in colors you would normally find at your average civilian Fire Dept or Fire Brigade. The one in a green suit is painted to represent a military CBRN-E Team member attached to a civilian team as a team lead during a Zombie or other disease outbreak...when the times get rough and the military is stretched thin, they'll use anybody with a little bit of training.
I had a lot of fun with this set and plan on picking up the HazMat Communications Team Member Hasslefree does as well. Obviously after the "no purchases" time of the 6 Month challenge is done.
Posted by Spiderweb of History at 9:23 PM 2 comments: 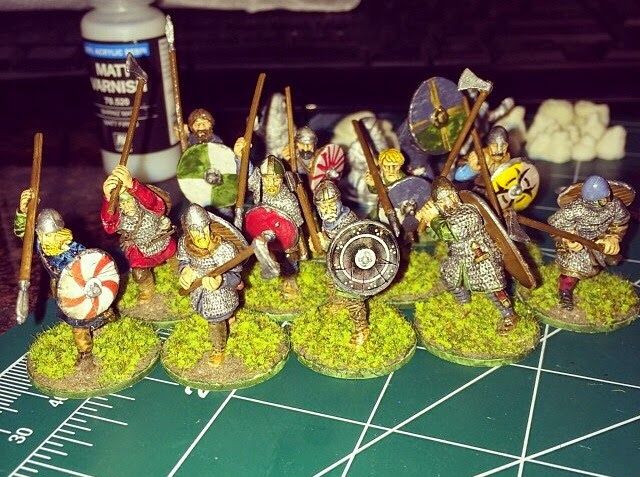 The first half of my Anglo Dane starter force from Gripping Beast for SAGA. I'm not going to lie, while they look great painted up, they're an absolute PIG to clean up and prep. Mold lines out the ting yang and quite a bit of flash. But once they're cleaned up, they take paint well, and have a decent amount of detail. Add paint and those lovely shield transfers and they look great!  The other half is on the bench for the 6 month challenge. 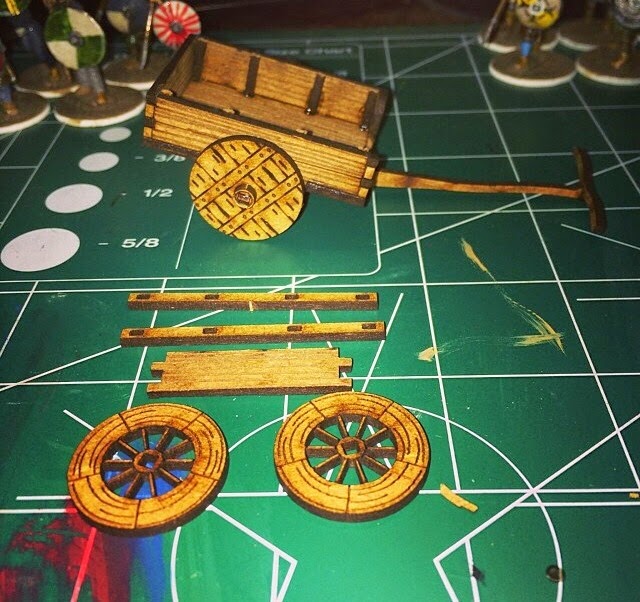 This Dark Age Wagon is my first build of a kit from 4Ground. I have nothing but positive things to say. Took me 15min to assemble, and that's even with having to do a tad bit of carving to get the supports for the sides to fit in the holes right.  I've got several other 4Ground kits to build, and I'm looking forward to it. Now to just find some good oxen to drag this thing around in scenarios for SAGA and Dux Brittaniarum.
Posted by Spiderweb of History at 4:25 PM 1 comment:

1/72 or 20mm Plastic Celts. Ready to do battle with the invading Romans.
These are a mix of Airfix, ESCI, and HaT. 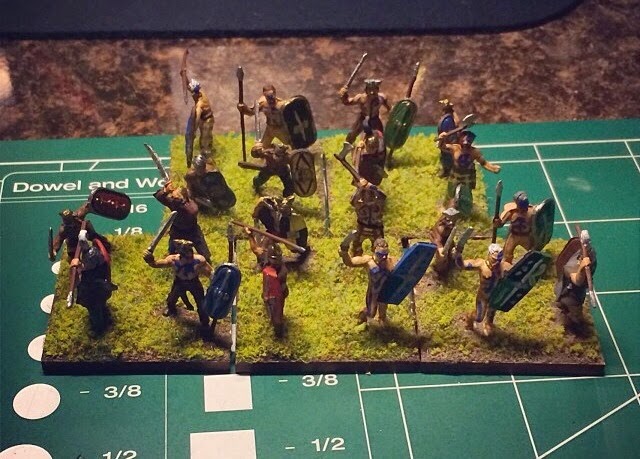 I've got a ton more to do, and am still looking for a ruleset I'd like to use for them.  Any suggestions? I have and will use "Hail Caesar", what do ya'll like?
Posted by Spiderweb of History at 4:12 PM 2 comments:

A Couple of Zombie Apocalypse Survivors

First off, these were finished back in Zombtober 2013. For some reason I didn't post about it. )))) shrugs (((( whoops. Anyways:
Survivor #1: The Mad Priest. This guy has been driven insane by the evil that now walks the earth, and is constantly exhorting his flock to go out and kill the beasts of hell. 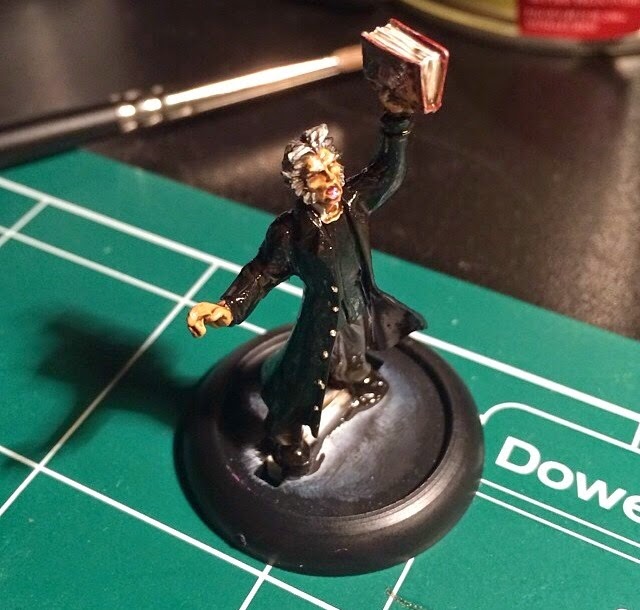 The base still needs finished, but that'll be done during the 6 month challenge I do believe. He's a Reaper fig, nice detailing and had very little flash or mold lines. Took the Army Painter Dip very well!
Survivor #2: Tyrone the Coreectional Officer. A hard charging go getter. He went through the hell that was the federal prison after the Z-Poc hit, and had to liberally use his baton to get out. 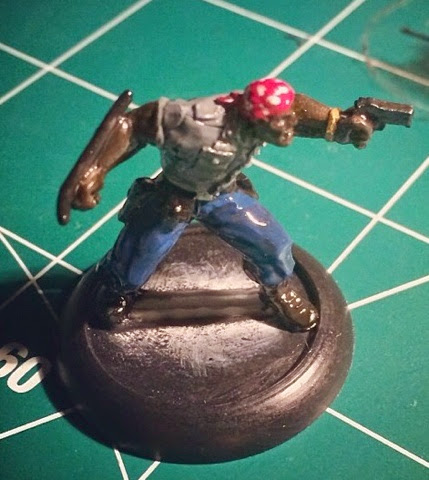 Also a Reaper figure, very clean sculpt. I left the baton slightly bent to show use in combat.
Posted by Spiderweb of History at 4:02 PM 1 comment: 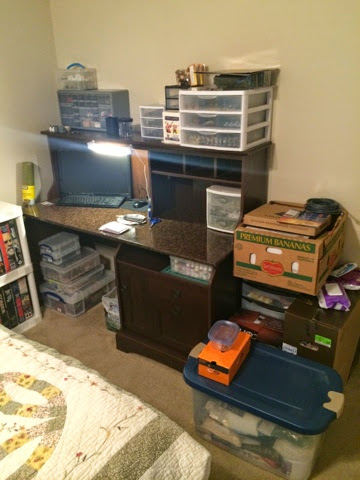 So having recently (read that - last week) moved, I'm unpacking and organizing the  hobby area.  Here's a very brief overview of what's going on in this picture.
The boxes under and to the right of the desk are all full of unpainted lead and plastic. I don't have an accurate count of numbers but suffice it to say...it's a lot.
Far left top of the desk is my bins o' bits. Other upright storage drawers on top and in the desk are mostly primed figures waiting for paint.
There will be further updates coming shortly. Stay tuned.
Posted by Spiderweb of History at 9:29 AM No comments:

Passed 1000 Pageviews overnight. That's quite exciting and flattering. Here in the next several days stand by for several posts involving preparations for the 6 month challenge. Thanks again for all the views and stand by for further updates!
Posted by Spiderweb of History at 12:24 PM 2 comments:

So, quick update...sorry no pics.

Ok, so myself and Chris over at Chris' Miniature Woes have been communicating quite a bit and we've come up with this plan (read that as - CRAZY IDEA):

Starting September 1st, we're going to do a 6 Month Painting/Hobby Challenge, and blog and Instagram about it.  That doesn't sound too bad, does it?...HaHa read the rules we've come up with:

1. No purchasing of new miniatures, EXCEPT if you use a joker card.  Like in a deck of cards, you get two jokers to use on a figure purchase.  Could be a blister pack, an ebay bundle, or a single figure...you can't splurge.

2.  Gifts do not count against you. Christmas and or birthdays etc. Also, if you're given gift cards by your hobby illiterate family or friends, you can without penalty use them on anything you want miniatures wise.  I luck out here, as I'll have Christmas and my birthday during this 6 Months.

3.  Paints, terrain (or materials), and other hobby supplies do not apply to the no purchasing rule.

5.  Zombtober will be part of the 6 month challenge so, Zombie related stuff during October is ENCOURAGED.

That's about it for the rules. We thought it'd be fun, economic, and a good way to encourage each other and reduce the lead mountain some.  If ya'll would like to join in the fun, drop Chris or I a line, give us a follow, and lets get painting!

Posted by Spiderweb of History at 5:33 PM 3 comments: