Some Thoughts and Plans

Hello All,
This will be my last post for about a week and a half due to my leaving Sunday to take my 3 year old to Tennessee for surgery, and on that note, thoughts and prayers for him, his mother and I would be greatly appreciated.

Alright, firstly a quick thank you to Nick Grant over at 20mm Gamer Blog for answering some questions I had, as well as suggesting a ruleset for playing Ancients games.  While at some point I do want to pick up a copy of DBA, I was introduced to Ancients wargaming back in 2004 or '05 with the WarHammer Ancients rules and greatly enjoyed them so I'm leaning towards those atm because I've had a copy for a long time, and my budget is rather tight.  Eventually (as money and time allow) there are a bunch of rules I'd like to try...but again, money is an issue.

Now, my budget the last 2 weeks has been aimed primarily at gathering the equipment and reference works for painting up the figures I already have.  My next post when I return from TN will be a detailed description with some pics, of my future forces for both my Early-Mid Imperial Roman Army, and my Celtic/Gaulic/Barbarian Army[s].  Some of the reference works I picked up were: 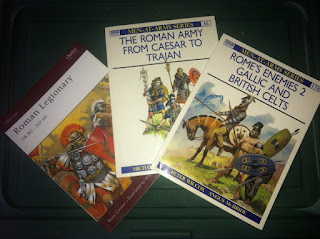 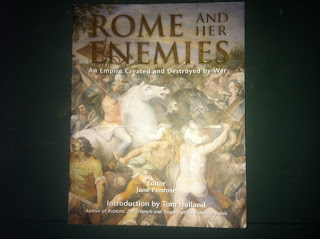 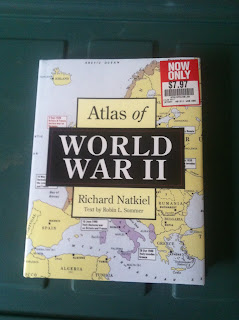 Now, a quick heads up.  The book, "Rome and Her Enemies" is actually published by Osprey as well, but I didn't know that.  Almost all of the text and pictures from the three obviously Osprey books in Photo 1 are in  "Rome and Her Enemies" just covered in more depth.  The good thing about this situation is that I don't have to buy any other Osprey books relating to Rome or any of their opponents...it's all in there!  Also, the artwork plates in the wee little Osprey books are larger than in "Rome and Her Enemies", so I'll use them as my inspiration pics for painting, and then probably sell or trade them off.

Photo 3 was an impulse grab at my local bookstore.  They had a sale on for buy 2 get 1 free and "The Atlas of World War II" was my free book.  It's excellent. Loaded with maps, photos, and great historical data, on not only the battles and situations, but also the terrain etc.  I think it was a great grab.

I've decided that also as time and money allow, I want to look into 6mm gaming.  Listening to back issues of The Meeples and Miniatures Podcast I heard a couple interviews with the owner of Baccus Miniatures and I went and had a look and I have to say, 6mm looks fun as all get out.  I think that'll be my way of getting into Napoleonics gaming...which is something I've always thought would be fun but didn't want to spend a ton of money on.

Some other things I've been thinking quite a bit about is getting really into and going with "Zombicanus".  I know, I know, I've only put up one little tiny post with it...but I have a ton of ideas both for it as a story and also potentially an interesting little game. We'll see.  Nobody can say that I don't jump in with both feet when I start up a new (sort of) hobby!

Anyways, thanks for reading my rambling and I'll see y'all in a week or so.  Comments, criticism, and ideas are always welcome.

So, this is my first blog post here in awhile, and definitely my first wargaming post, so I decided to launch 2013 with a list of my goals.  Keep in mind that I am a beginner to table top gaming, though I've been playing board wargames (Avalon Hill, SPI, Axis and Allies and others) for a long time - read that as over 10 years, so I'm now launching myself into tabletop gaming.

I'm a huge military history enthusiast  so my wide range of interests in different periods could probably lead to a very expensive hobby...that being said, I've had a TON of 20mm plastic figures since I was a kid, covering a wide range of conflicts and time periods so I'm going to start with them.


Its a long list but I'll be attacking it in chuncks.