A Tale of Wargamers? 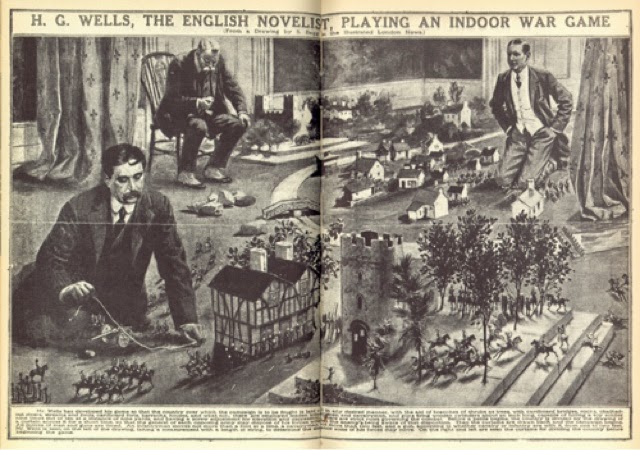 No pictures of minis today but I have been wittling away at some more Vikings and I've finally started on "The Family" from Across the Dead Earth.
I've also entered the latest terrain competition that The AtDE facebook group is running. Two rules for the competition - 1. The base can be no bigger than a CD.
2. Minimal purchased bits. Must be mostly scratch built. Looking forward to this. I've got a couple ideas, to the point of possibly entering 2-3 pieces.
The real reason I'm posting today is because I'm curious...I was listening to an old episode of the View From the Veranda podcast (w/Neil Schuck and Henry Hyde) and they were talking about inspiration for wargaming. Which got me thinking of a couple questions for you all. (Call me rather weird, but I do consider my followers as cyber friends, hence I'm curious, and be advised, if you're ever in the Kansas City area, shoot me a message and we can try to have a game!)
So the questions - 1. What started you into wargaming, or board gaming?
2. What inspires you to wargame or pick up a new period/genre?
I look forward to reading your replies.
Posted by Spiderweb of History at 6:47 AM 5 comments:

The Worst Of Men...err undead?

Finished these guys up today as well - 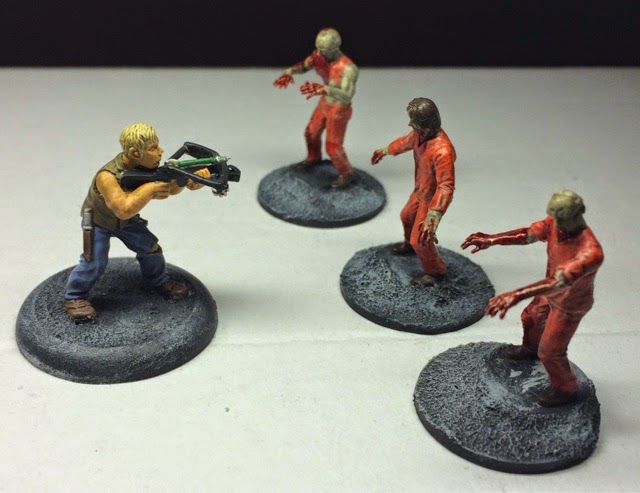 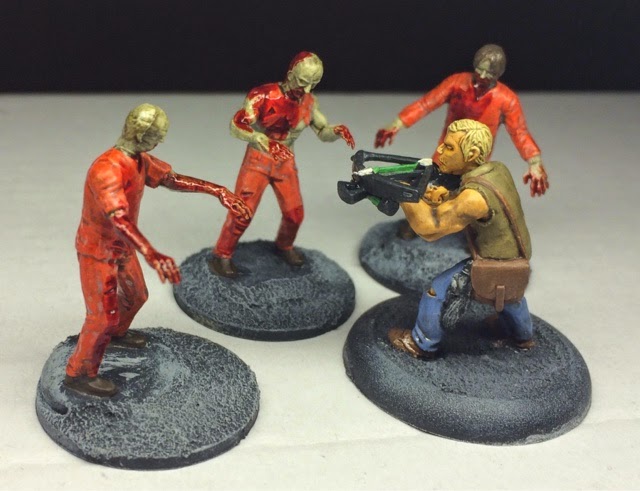 Studio Minis plastic male zombies painted as inmates. I want to make some number decals for their backs, as I'm terrible at free handing at this scale. The crossbow man is the "not Darryl Dixon" figure also from Studio Miniatures.

Posted by Spiderweb of History at 10:44 PM 5 comments:

Starting the Year off Right!

I'll admit, most of these were started in some way shape or form in 2014. But as I do not count a figure finished til it's painted, based, varnished, and had the bases dressed up a bit...all these are going into the 2015 stats.

So, what do we have:

Continuing on with the Dark Ages, we'll start with some Norsemen - 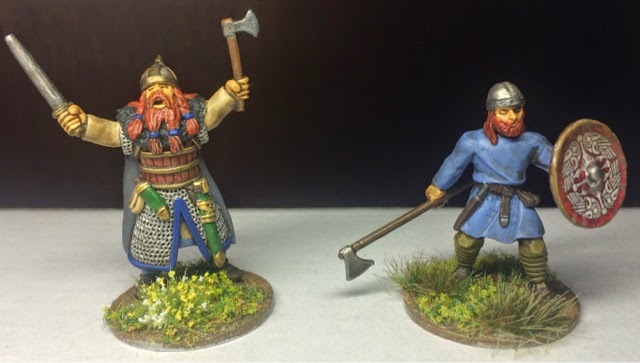 Gripping Beast metal figures, the imposing gent on the left is probably one of my favorite figures in my collection at the moment. 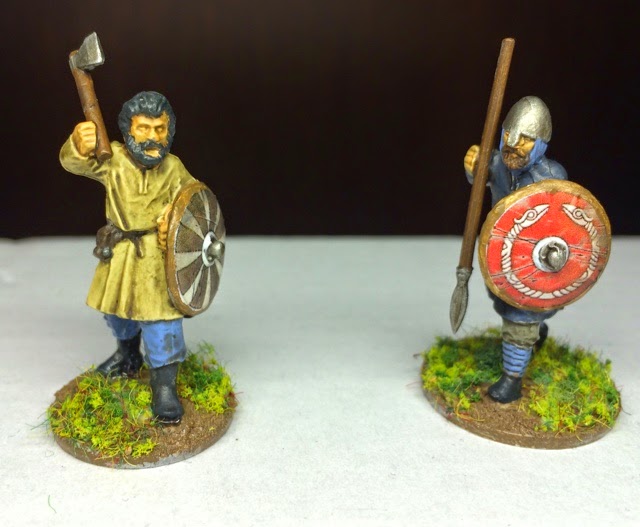 Here's a couple of Viking warriors. Does anybody else hate mitten hand as much as I? I'll eventually attempt to sculpt some fingers on both these guys.

A couple of slingers and a Hearthguard warrior. 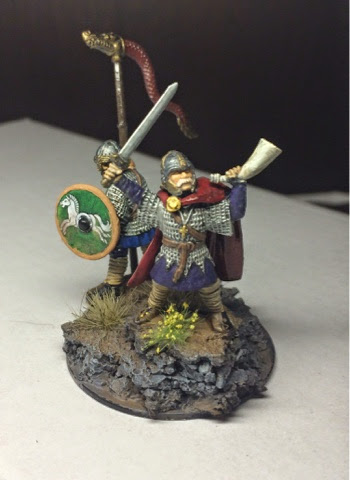 Command stand for either Anglo-Danes, Anglo-Saxons, or Romano-British. 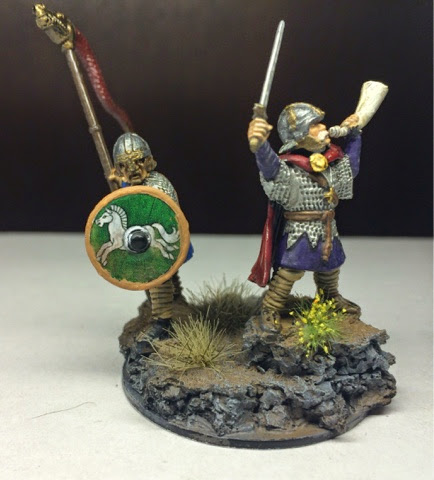 And last but not least, a kit bash figure - 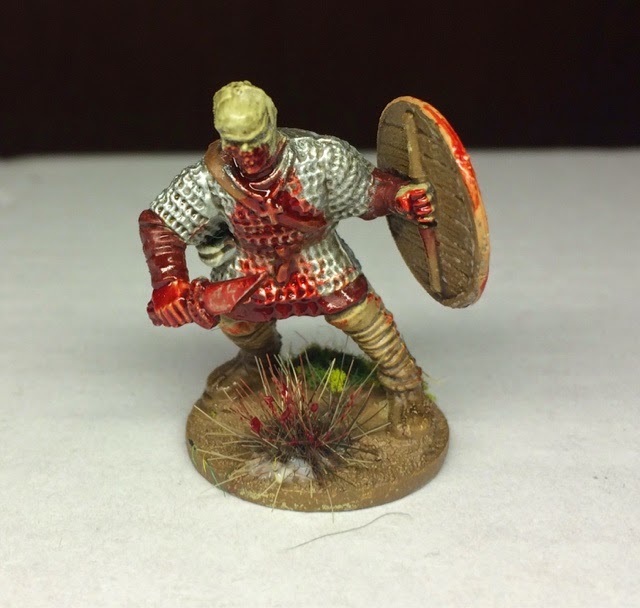 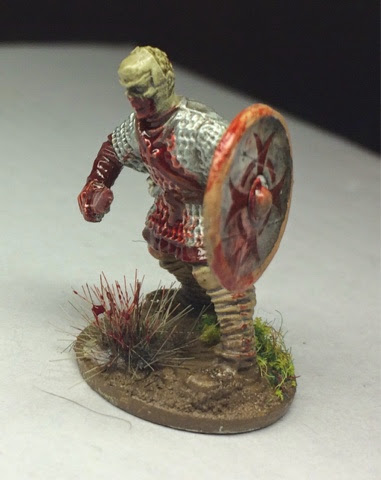 Posted by Spiderweb of History at 10:37 PM 6 comments:

Happy New Year everyone! A bit belated, but I was exhausted New Years Eve and worked New Years Day. So.

Positive progress all around!

Now a few thoughts.  I didn't really post a "Beginning of year goals" post in January 2014, but I did have some goals in mind, and I'm glad to say, I met almost all of them.

1. I told myself I would actually game more in 2014 - Accomplished.  I formed a small games club that I'm calling "The Crossed Tomahawks" Gaming Club.  We meet AT LEAST once a month, but have been aiming for, and for the most part succeeding in gaming at least twice a month.

2. Paint More Figures - As seen by the numbers above, I feel I crushed this goal!

3. Finish at least one base army - Accomplished.  The basic starter set of Anglo-Danes for SAGA is complete and have even seen combat...annnnnd were soundly trounced by some half painted Vikings.

4. Visit a wargames show - Failed.  I didn't make it to Historicon.

5. Take part in a painting challenge - Accomplished! Sort of. Haha. When I first made this goal, I was going to jump in on the BIG painting challenge thats currently running...I instead, joining with some other intrepid souls decided to NOT buy figures and instead try to reduce my "Lead Mountain" by painting as much as I could in six months.  We're 4 months in and going strong!

1. Take all the numbers from 2013/14, both blog entries posted and minis/terrain pieces finished, and completely smash those records.

3. Piggybacking off of #2 - Several ideas and plans for some campaigns shall come to fruition this year, and will be blogged about in AAR/Story format.

Ya'll have seen my project list...those are all still there, I'm just not going to bore you with it again.  I do have a feeling that there will be more projects added to the list though.

I seriously feel very grateful for the amount of encouragement I've gotten from y'all, and I hope you've enjoyed my seriously meandering in this hobby of ours.  Now, lets get this year going!

Posted by Spiderweb of History at 9:48 PM 6 comments: