After spending entirely too much money on this addicting hobby of ours this month, I had to sit back and do some serious thinking and evaluation of everything.

If you've been paying any attention at all to my stats over on the right side of the blog, you've probably noticed that the "unpainted" and "purchased" numbers have been steadily growing...and that the "painted" and all the "games played" numbers haven't moved at all.  This is a problem!  To rectify this problem I've committed myself to: Not buying anything else except - paint, modelling supplies, and brushes until this damn veritable mountain of metal and plastic has been either surmounted, or, at least turned into a much smaller hill.

I've discovered a couple "problems" that I think some, if not most people that are into wargaming have: One being that there are soooo many periods, genres, game systems etc. that I'd absolutely like to get into.  While on the one hand this can be a good thing most of the time...when it causes you to be tempted to spend too much money...'tis bad.

The other problem I've found is that working on the same big (for me) project for awhile gets either a little boring, or, overwhelming. So to solve this issue, my workbench now has quite a few seperate projects along side the Ancient British and Imperial Romans.  What I'd like to do now is list those projects, and show some of the aquisitions of this month.

Project #1: Ancient British Army
I've covered this before, but I do have a couple additions - "Hail Caesar" Rulebook, and HaT's "Gaulic Chariot with Warrior Queen" set #8140. I'm probably going to be doing some conversions because I don't think I need three Boudicca's! 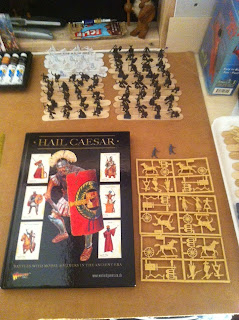 As you can see in the background is the majority of the rest of the army undercoated and waiting for paint.
Project #2: Zombie Apocalypse﻿
I'm a huge fan of the zombie genre.  I own quite a few zombie related video games for both PS3 and XBox and I also have several of the "Zombies!!!" games, but I've always wanted to play a full on miniatures game about zombies.  So, I picked up Wargames Factory "Zombies" and a whole bunch of Reaper Miniatures Zombies and Zombie Survivors.  There will be more detailed pics coming soon of the painting process for 'em, especially the likes of "Zombie Strippers" lol. 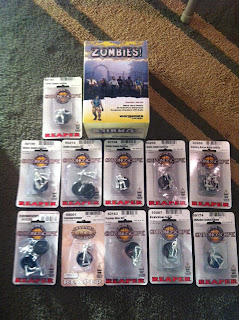 For a ruleset, I ordered "All Things Zombie" from Two Hour Wargames.  Let me just note here, the communication and shipping speed from them was fantastic!  Highly recommend Two Hour Wargames!

Project #3: Force On Force
I ordered a copy of "Force On Force" off of Amazon, and that has spawned a couple of projects -

Project #3.1: Vietnam
I've got a couple squads worth of U.S. Infantry (or Marines) and a couple of squads worth of NVA regulars to be painted up.  The really cool thing about FoF is that it's scope is based on a fire team up to a couple of platoons at most, so on the bottom end, you could have 4 figures per side and you've got a game. 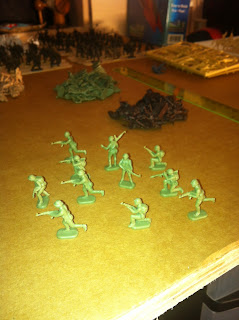 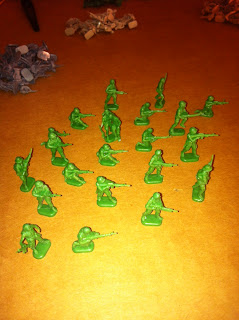 US Army/Marines
Project 3.2: Don't Tread On Me
﻿This may be a little controversial, but I'm working on the figures/forces/units, and also the backstory for a 2nd American Revolution set in either the 1990's or 2000's.  It will involve guerrillas, regular military and national guard, local police forces, civilians, foreign intervention, etc. etc. etc.
Project #4: The Interwar Years
I got the Osprey rulebook "A World Aflame: Interwar Wargame Rules 1918-39", and while I don't have many figures for use with it, I do have these what I think are Matchbox Miliatry Police or some form of German Polizie.  If anybody has any info on them I'd be interested in hearing it.  Anyways, I've got enough of them to paint up two styles - Some to see action in Palestine in the 1920's and '30s, and some for use in Ireland in the 19 teens or '20s, or for use in A Very British Civil War.  Should be fun! 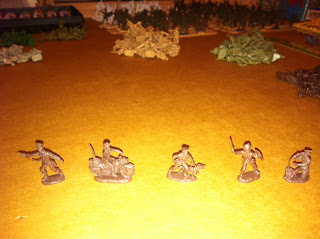 These are the main projects ATM.  I've got misc ideas, patterns, and plans for terrain and buildings...and digging through my collection brings more and more ideas to the forefront...it's just finding the time!
Comments, thoughts, ideas, critisism etc. are always welcome.  ﻿
Posted by Spiderweb of History at 9:17 AM 1 comment:

So, in the last month I've accomplished a whole bunch of nothing substantial. Lol. Life has been crazy, as has work, and now I'm considering relocating back to the midwest...so job hunting out there has kind of started.  On a side note, compared to the period of approx 6 months I was unemployed a couple years ago, this job search is much more relaxed seeing as how I have a good job atm.

Now, I have prepped all of the Ancient British forces, and have undercoated roughly half of them in about two hours worth of steady work. I also have picked up a copy of "Hail Caeser" off Amazon, and I must say...I like it alot after playing a quick run through with some cut up strips of paper as units.  While I plan on using it for awhile, rules systems and how they are written intrigue me so I'm sure I'll be keeping my eye out for more in the future. 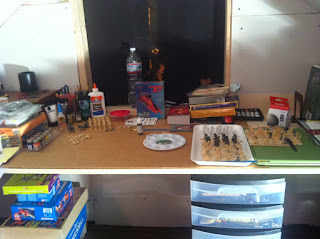 My (actually quite clean) Workbench at the moment.


Christmas (or late birthday) is coming for me in March!  Ordered a bunch of stuff that has been on my wishlist for the better part of a year: