A couple weeks ago, I erroneously posted on the twitter-verse that I was "not interested and not going to get into GW's "Kill Team".  At the time, I really wasn't.  Buuuuuuuut, my good gaming buddy Kev bought the box set and has been bugging me non stop since then.

So, because I had some Tau sitting around for a sci-fi project that's on the back burner (not anything related to 40k), I finally succumbed and told him I'd paint them up.  Which leads to this post and an ACHIEVEMENT!

Below, you will see a picture of 10 Tau infantry, 2 Drones, and a Tactical Turret........which I FINISHED in about 4hrs.  They're nothing special, but it's literally the fastest turn around I've ever had for finishing models.  13 figures in 4hrs.  I'm very pleased.

Note, I painted them in a desert style to meld with my still on the back burner sci-fi project, but they'll work for "Kill Team" and Kev's happy.  So good all around.  Now to see if he's mastered the rules enough to teach it to me.

That's all for now, couple more posts coming soon with more intros to my MOP forces, and some Guild Ball goodness.  Thanks for reading!

The Ministry of the Occult and Paranormal Intro - 1: 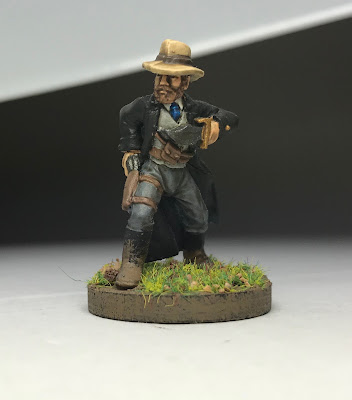 I sit here drinking my beer contemplating my next steps.  My name is Michael O'Brian.  I am...well...was, an agent for the United States Secret Service.  My new assignment is just that.  New.  I am now the American representative of, or to, a new agency collaboration between the United States and the British Empire called, "The Ministry of the Occult and Paranormal."

"What the hell does that even mean/!"  I believe my face may have telegraphed that very sentiment as I sat across from Director Edward Thornton in his office.

"There have been some strange...situations, that we feel need to be investigated and dealt with - and we feel you're the right man for the job." He said.

When I attempted to ask a question, he shoved my reassignment order across his desk to me and said, "I know you have questions.  Address them to your British counterpart when you get to England."  I was then promptly ushered out.

So.  Here I sit.  I have been authorized up to 10 additional agents or consultants as part of the U.S. contingent, but I've been told I need to speak with the British first before selecting them.  So I'm on my own for now.  Hopefully they have coffee in England.

While I probably shouldn't be writing any of this down per instructions about "secrecy" given to me by the director...I feel that as one of the founding agents of a very strange agency...I may some day want a record of events so as to be able to accurately tell my story.

(Note - I was given an address to send my reports to.  A place called "Wardenclyffe" on Long Island.