A couple years ago, I took  short trip to Belize for vacation for a week. While there, I got to chatting with a Belizean Police Officer about the history of Belize and he mentioned the tension that has been between Belize and Guatemala for as long as he could remember.
That got me thinking about an imagi-nations campaign set in the 1970's and 80's where Guatemala and Belize and their sponsor states and other Central and South American countries fought a hot Cold War.  To that end, I've started the process of building up some stuff for it.
Belize, as a member of the British Commonwealth - has a constant presence (no matter how small) of British Army advisors or troops. So, first up we have 12 British Army infantrymen or they could also double for SAS troopers. Peter Pig figures from their AK-47 range. Painting DPM jungle camouflage in 15mm was a bit of a challenge, but I think they turned out ok.

Next up we have 9 Belizean Police. These are also from the Peter Pig AK-47 range. Will obviously need quite a few more of them; as well as at least a platoon of Belize Defense Force infantry. 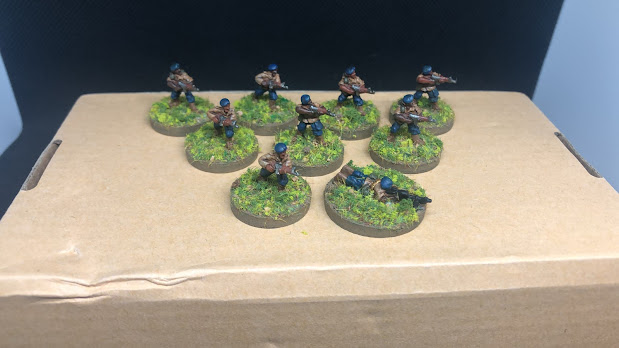 Guatemalans are on the paint desk now. I figure once they're done, I can do some small border skirmishes around checkpoints etc. This will be a slow build project but I think will be quite fun once it really takes off.
2021 Painted Figures - 540
2021 Finished Terrain - 14
2021 Games Played - 5
Posted by Spiderweb of History at 4:34 PM